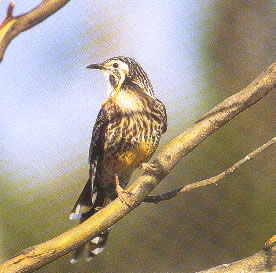 Range and Status: Widespread, particularly in the east and south. Uncommon by the 1960’s following extensive wildfires and clearance of forests for agriculture, especially in the first half of the 20th century. Probably more widespread in the last 40 years of the 20th century as a result of maturation of regrowth eucalypts and protection of native vegetation. Population recovery threatened by projected clearance of scrub and heath and uncontrolled wildfires. Uncommon breeding resident and endemic subspecies.