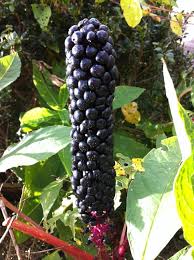 We need your help! If you have seen this weed and know of its location, please contact us ASAP. Phone 6462 1825 or email: kingisland@landcaretas.org.au

This weed can rapidly become an environmental and agricultural problem so we need to act NOW! Inkweed has been found on King Island around Fraser Road, North Pegarah and Pegarah Forest. This is a NEW INCURSION on King Island, the only known location in Tasmania. The King Island Natural Resource Management Group has funding to start an Inkweed control program to eradicate this weed from King Island. More information about this weed:

KINRM continue to map and control an infestation of serrated tussock near Colliers Swamp.

A second KI Council project, funded by Cradle Coast NRM with assistance provided by the Australian Government’s Caring for our Country program, and managed by KINRMG, began building community awareness of this potentially damaging weed. Control methods will be demonstrated at heavily infested sites. Some control of outliers has been completed . For further information please call 64621825. Download more information on Pampas Grass on King Island.

Allowed us to continue follow up control of Weeds of National Significance. On King Island these are Bridal creeper and Boneseed in Currie bush areas; Serrated Tussock in the Red Hut area, and Blackberry nearby Lavinia State reserve.

This was a small sister project to the Currie Wharf bush restoration project, where Council got involved in continuing the restoration work across the road on their land. A bush walk identifying natives and weeds and visiting an almost weed-free part of the site was an inspiration to those who attended. We also began clearing out weeds and forming a track into what we now call ‘White Gum Gully’ and plan to make this a place people can sit and enjoy in future.

King Island Council contributed excavation of a section of large boxthorn and coprosma, which we then prepared and planted in community field days. See photos

ARTICLE EXTRACT:
Enthusiasm and amazing results in the gully of white gums An incredibly enthusiastic group of 14 people made a huge impact in the gully to the north of Wharf Rd on Saturday 23rd Feb. The area that used to be blocked by the prolific Currie weed, Polygala, is now clear, enhancing the beauty (and biodiversity), and making an access-way into this special little gully. For the explorer types, it is pretty easy to go in there now and have a look. This project is a KI Council project, funded by Cradle Coast NRM with assistance provided by the Australian Government’s Caring for our Country program. …An activity for 10 Days on the Island is also planned in this area, where weed materials, and other nest building materials that can be removed without negative impact, will be collected to build a replica of the nest that will be used in the Birds performance. All are encouraged to come along to these field days, it is awesome what many hands can achieve in a short time. As one volunteer said, “We are all enjoying the day out with like minded people and having such a lovely lunch together, and certainly feel a real sense of achievement.”

A Management Plan for Sea Spurge has recently been developed. This plan aims to provide a strategic and co-ordinated approach to community-based management of sea spurge (Euphorbia paralias) on King Island. It provides a practical framework for the management of sea spurge, concentrating on on-ground work, while keeping in mind the need for integrated management including other weeds and issues of concern around the island’s coastline. It provides volunteers, community groups, land managers, key stakeholders and professionals with a tool for attracting and applying human and financial resources that enable effective and strategic weed management actions.