KI Natural Resource Management Group received a grant to protect ‘Boggy Creek Geoheritage Site’, otherwise known as ‘tufa terraces’, and ‘Coastal Complex on King Island’, a rare and endangered ecological plant community, by excluding stock and controlling weeds. The project is made possible through funding from the Australian Government’s Caring for our Country initiative. The tufa terraces are in Cataraqui Point Conservation Area, while the Coastal Complex on King Island lies in the coastal zone as well as into the neighbouring landholder’s property. The landholders will fence out part of their coastal paddock to protect the endangered plant community.

The ‘tufa terraces’ rim stone pools are delicate formations, which are nationally significant and listed in the Tasmanian Geoheritage Database.
Removal of the coastal weed Sea Spurge will also protect these sensitive environmental assets from weed invasion. Sea Spurge will be replaced with coastal native plants where needed. Dune vegetation will also be enhanced to stop erosion and weed spread. Community groups, individuals and schools will be encouraged to be involved in weed removal and planting. 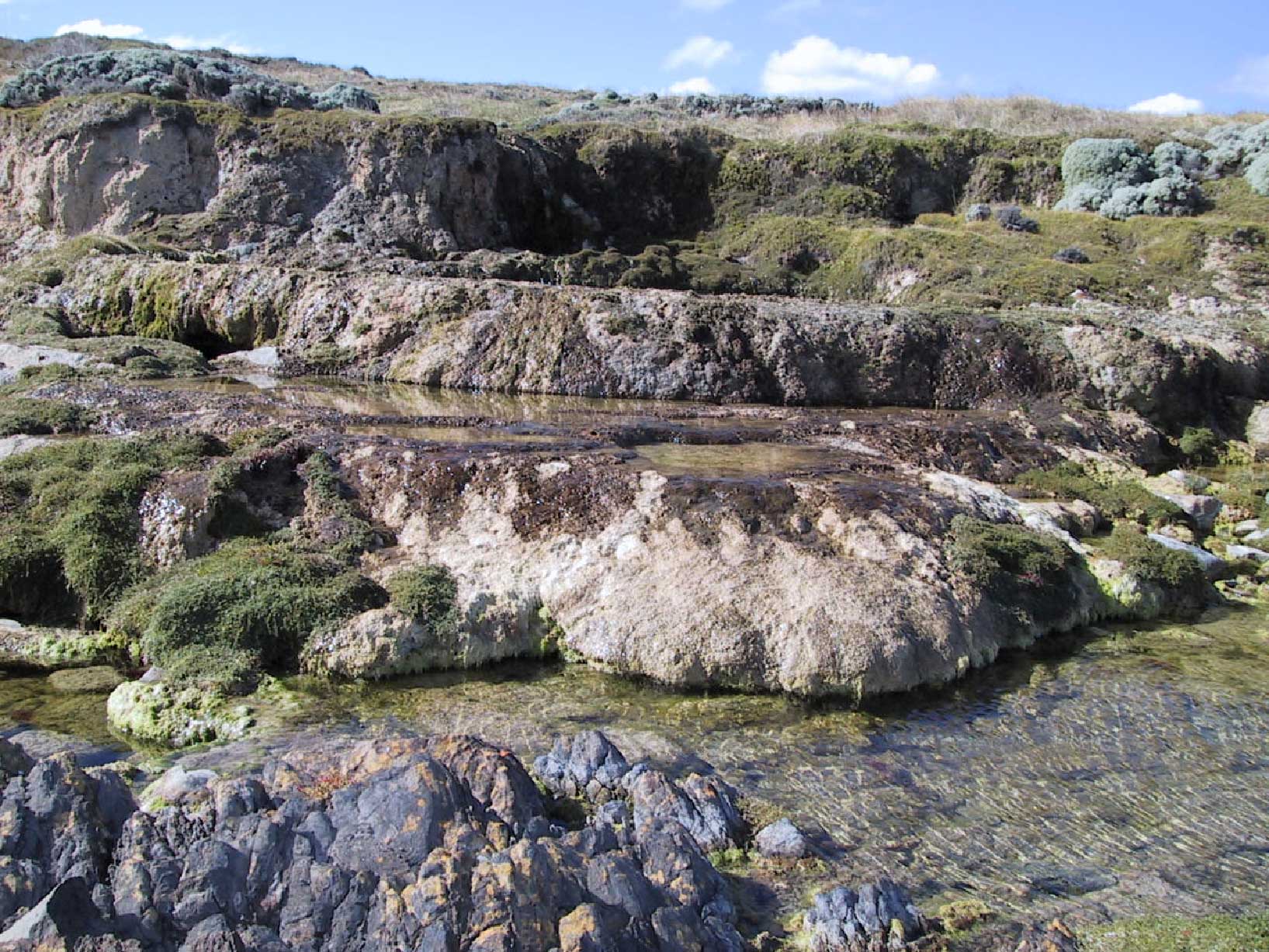 These pools probably started forming 5000 to 6000 years ago. This was when the sea level stabilised at approximately the level it is today. The pools are composed of lime or calcium carbonate, which originated from the dunes just inland from the coast. These dunes have a very high shell content. When it rains water percolates through the topsoil becoming slightly acidic, percolates further and dissolves the lime out of the dunes and then continues to flow down towards the sea where it comes out onto the surface as a spring. The water chemistry changes, it becomes less acidic and the lime comes out of solution and is precipitated over rough spots such as rocks or the pool edges. These are known as rim stone pools and they continue to grow today – a rock in the making.

Boggy Creek tufa terraces are the best examples in Australia, which, unusually, have developed outside limestone or dolomite caves where they are normally found. The old rocks and reefs at this site underlie vast parts of the island and are thought to be about 1000 million years old. They are related to rock sequences, which stretch all the way to South West Cape in southwest Tasmania.

Coastal Complex on King Island grows on granite and volcanic rocky outcrops along the western, southern and south-eastern wind-swept coastal areas of the island. On very rocky and exposed locations, such as near Boggy Creek, upright shrubs and trees have been replaced by open fields of grasses, herbs, sedges and small low-growing shrubs. In good condition, Coastal Complex on KI has very high species diversity, especially in the number of species of herbs, daisies and low-growing shrubs. Some of these species, such as southern pellitory (Pariertaria debilis) and spiny everlasting (Ammobium calyceroides) are rare or uncommon on the island. This plant community has been extensively modified across most of King Island, with most patches now occurring in a degraded condition. It is in good condition at Boggy Creek.