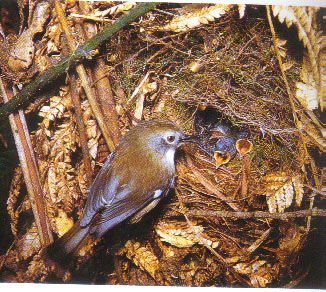 The scrubtit is also distinguishable by its habit of foraging for insects up tree trunks like a tree creeper.

It is estimated there are less than 200 Scrubtit on King Island so they could go extinct due to catastrophic events like bushfires and disease epidemics. The King Island Scrubtit, a race of the endemic Tasmanian Scrubtit, is only found on King Island.

This bird favours paperbark swamps. The Nook Swamps, the largest stand of paperbarks on the island, is the only site where Scrubtit have been seen in recent years. Scrubtit are not an easy bird to identify from other small brown birds.

Twelve people came to a training field day at the Nook Swamps and we saw 6 Scrubtit that day. For 4 days we explored the Nook Swamps and counted Scrubtit. This was a big challenge because not only are Scrubtit very active small birds but also their swamp habitat is full of fallen trees and nettles and not easy to navigate through. We only covered a small area of the Swamps but over the 4 days we saw 20 Scrubtit including family parties with adults and dependant young. It has been estimated that there are 50 Scrubtit in the Nook Swamps but 100 birds is not unlikely.

More than 40 years ago Scrubtit were recorded at Pass River and Pegarah State Forest. We didn’t find any this time but the habitat still seems suitable, though not as extensive as in the past. It was very exciting to discover Scrubtit for the first time at Colliers Swamp, the second largest patch of paperbark swamp forest on King Island.

Exploratory searches confirmed that the Nook Swamps is the major habitat for Scrubtit on King Island. It is very important to protect these forests from fire. It is also very comforting to discover Scrubtit at Colliers Swamp. This swamp is not as large as the Nook Swamps but for a small bird facing extinction this is like ‘life insurance’.