We need your help! If you have seen this weed and know of its location, please contact us ASAP. Phone 6462 1825 or email: kingisland@landcaretas.org.au

This weed can rapidly become an environmental and agricultural problem so we need to act NOW! Inkweed has been found on King Island around Fraser Road, North Pegarah and Pegarah Forest. This is a NEW INCURSION on King Island, the only known location in Tasmania. The King Island Natural Resource Management Group has started an Inkweed control program to eradicate this weed from King Island. Click here for more information about this weed and project.

A Conservation Action Plan has been developed for both the King Island Scrubtit (Acanthornis magnus greenianus) and King Island Brown Thornbill (Acanthiza apical Archibaldi). A Recovery Team with members from all stakeholders including the KINRMG  was formed in 2019  under BirdLife Australia’s Preventing Extinctions Program. Meanwhile, extensive searches to ascertain the abundance and distribution of both species are underway and habitat information is being updated. More information is available at Birds of King Island website.

Wings on King – monitoring the birds of King Island

Despite King Island being such an important location for birds, we know very little about the conservation status of the land birds of King Island or its value to birds migrating across Bass Strait. In this project of the KINRM and BirdLife Australia in association with Birds of King Island we aim to:

More information is available at Birds of King Island website.

View the Project Image Gallery & Coastal Complex Info Sheet. KINRM aim to protect ‘Boggy Creek Geoheritage Site’, otherwise known as ‘tufa terraces‘, and ‘Coastal Complex on King Island’, a rare and endangered ecological plant community, by excluding stock and controlling weeds. The tufa terraces are in Cataraqui Point Conservation Area, while the Coastal Complex on King Island lies in the coastal zone as well as into the neighbouring landholder’s property. The landholders will fence out part of their coastal paddock to protect the endangered plant community.

Funded by WWF and Threatened Species Network, to protect from cat predation the Orange-bellied Parrots when they come to rest here during their migration.

Working with farmers to identify and address environmental issues.
One of 18 national pilot projects funded by the Natural Heritage Trust, Australia wide and the only one in Tasmania.

Sixteen farms participate in the program with farm mapping, risk assessment and the development of an environmental management plan.
Consolidation of project in 2006/07 through monitoring and evaluation, benchmarking, external reviews and developing continuous improvement cycles. More Information…

A project funded by the Threatened Species Network, to: determine the extent of vulnerable to critically endangered birds, and to address their habitat needs; to raise awareness in the community about King Island’s threatened bird species; collate data of bird sightings and encourage Green Rosellas to breed, through volunteers setting up and regularly checking nest boxes. More Information…

Included fencing, re-vegetation and direct seeding, and waterway protection, the development of several strategies and the publication of a number of books and reports. A community group worked intensely for over a year on the publication of ‘King Island Flora: a field guide’. A revolving fund was set up to protect valuable ecosystems on the island through buying properties, covenanting and re-selling, this is ongoing run by Tasmanian Land Conservancy.

This highly successful project has rehabilitated the lower reaches of Porky Creek. Both the KINRM weed team and the adjoining landowner continue to control difficult weeds such as boxthorn. Originally funded through Tasmanian Landcare Association grants 2011-2012, this project has had a great deal of volunteer input. Activities include: initial clearing of boxthorn and other weeds; 41 Ballarat and Clarendon students planted 75 trees; further planting and seedling maintenance by volunteers; on-going weed follow-up by KINRM Weed Crew. The project has been sponsored by Landcare Tasmania, Wildcare Inc, Tasmanian Parks and Wildlife Service, King Island Dairy/Lion, KI Men’s Shed and HBL.

Data collected includes water monitoring of selected waterways, comparison vegetation data from 2010 to 2011 on wallaby exclosures, a small study involving protecting the endangered orchid Pterostylis cucullata (leafy greenhood) from wallaby browsing and recording differences with unprotected sites. Only 2 Orange-bellied parrots were recorded during the blitz in March 2012, in which staff of the Threatened Species Unit, Tasmanian Parks and Wildlife Service and volunteers monitored all known sites for the presence of the critically endangered bird. Population monitoring and habitat restoration work will continue to be completed by volunteers and as project funds become available.

KINRMG ran water monitoring and education activities over many years culminating in Water Quality and Stream Condition on King Island, 2004 – 2008

Waterwatch: to assess the quality of King Island’s waterways. [Project Details]
The project was for a time part of North-West Waterwatch and included monthly monitoring of nine sites to obtain baseline data of the quality of King Island’s streams, additional monitoring by community members and educational activities for the community, including school students. More details…

KI Natural Resource Management Group continues to protect ‘Boggy Creek Geoheritage Site’, otherwise known as ‘tufa terraces’, and ‘Coastal Complex on King Island’, a rare and endangered ecological plant community, by excluding stock and controlling weeds. The tufa terraces are in Cataraqui Point Conservation Area, while the Coastal Complex on King Island lies in the coastal zone as well as into the neighbouring landholder’s property. The landholders have fenced out part of their coastal paddock to protect the endangered plant community. The project began with funding from the Australian Government’s Caring for our Country initiative and has current funding through their Communities Environment Program.

The ‘tufa terraces’ rim stone pools are delicate formations, which are nationally significant and listed in the Tasmanian Geoheritage Database.
Removal of the coastal weed Sea Spurge will also protect these sensitive environmental assets from weed invasion. Sea Spurge will be replaced with coastal native plants where needed. Dune vegetation will also be enhanced to stop erosion and weed spread. Community groups, individuals and schools will be encouraged to be involved in weed removal and planting.   View more project details, and project image gallery.

The area is a great example of King Island coastal bushland, including peaceful gullies and lookout spots. It was overrun by weeds and most of it is very difficult to access, but plantings and natural regeneration are turning this area into a trhiving, diverse coastal habitat. 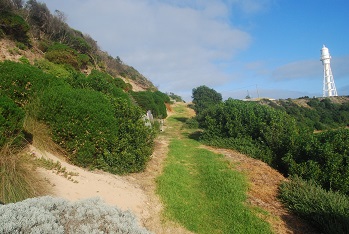 A new track links the harbour with the museum and Currie Light, following the path taken by Lighthouse Keepers in the past.

This site of approximately 19 ha is located directly adjacent to the Main Street of Currie and contains some recreation tracks, seats and lookouts already established by King Island Council, making it an ideal site to access for community awareness activities in the future, as well as tourist walks.

The project began with funding to KINRM through Australian Government Caring for our Country in 2011 and has current funding through their Communities Environment Program. The program has received much support and funding from Cradle Coast NRM, KI Council, KI Ports. The site is much improved, now more accessible and user friendly, as a result of stakeholder support and massive amounts of time and energy given by community volunteers. 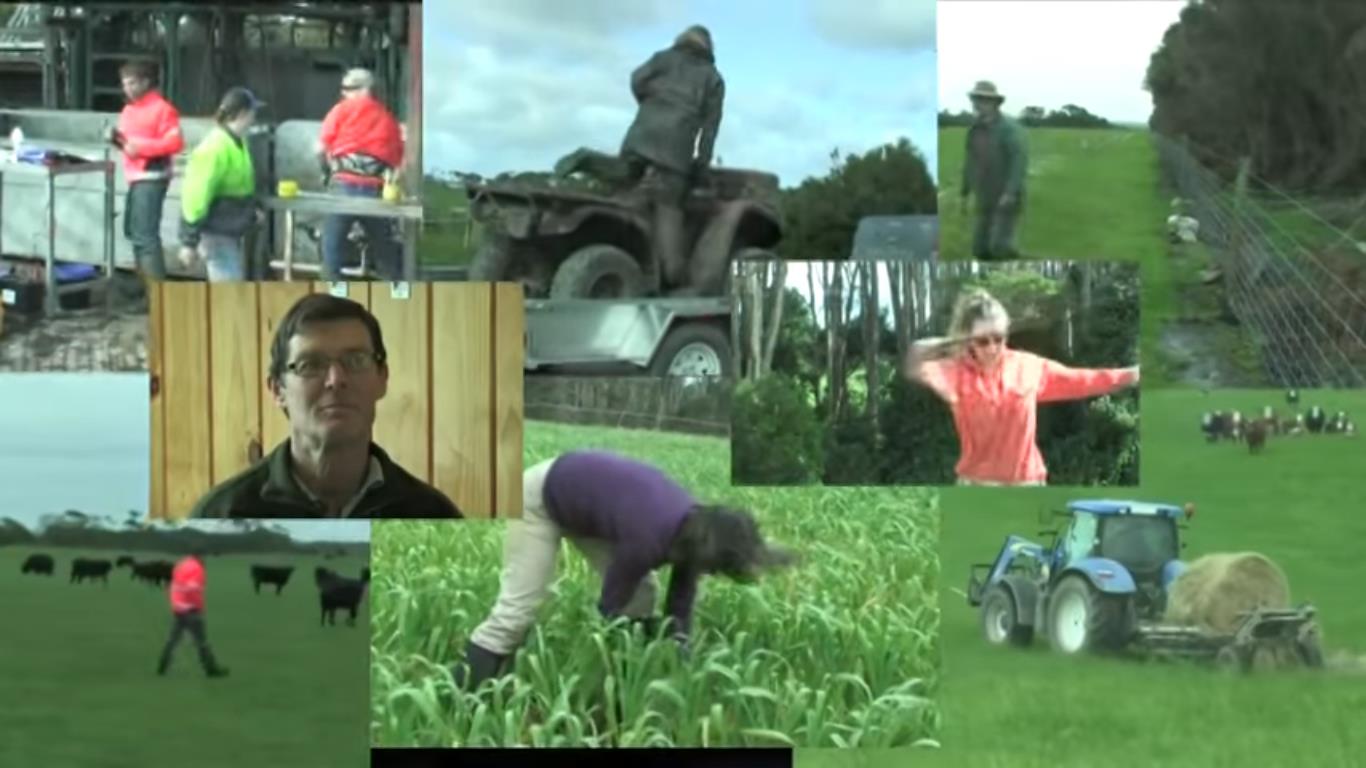 King Island Farmers’ Survey 2016 -See the results from 39 King Island farmers who replied to an online survey about their farm management processes and concerns.

The project focus on impacts of changing management strategies to enhance release of nutrients bound in organic forms.

KI has an intensive beef/dairy production and depends on imported fertilisers (25% more costly than mainland price), increasing costs and soil and water pollution.

KI has a variety of soils, including acid sulphate and salinity problems, making it difficult to know which management strategy is appropriated.

The project will provide a great opportunity for farmers to interact with experts and explore the biological potential of soils, understanding how management and use of on-farm/organic nutrient sources, including home products (e.g. kelp), impacts on biological processes associated with pasture growth and soil health.

Nutrient budgets show that some farms are applying a surplus of nutrients while others are applying a deficit, which may require some adjustment. The variability between paddocks highlights the importance of regular soil tests. Economising on soil tests by only doing a small number of paddocks can lead to some paddocks being over fertilised and others under fertilised.

Three projects followed up this original project and included:

A field day followed the workshop where Dr Bill Cotching gave a small talk about soil tests before sampling one paddock with all the participant farmers.  About 30 farmers participated in this field day.

with expert panel and development of Salinity and Waterlogging Control Manual.

Addressed management actions and hazard assessment of salinity on King Island, included the use of electromagnetic induction mapping and a hydrogeological study, drainage workshops and field days. Deep drilling to consolidate the results of KISHAP in 2006 completed the assessment. More Information…

Following the successful Salinity Partnership Project 2001, this project investigated the salinity problem in the north of the island and determine ways to best cope with it. A number of landholders set up piezometers on their properties and monitor once a month. Some trial pasture plantations were established to test salt-tolerant species.  A presentation of the sites is displayed at Reekara Community Complex. More Information…

Included fencing, re-vegetation and direct seeding, and waterway protection, the development of several strategies and the publication of a number of books and reports. A community group worked intensely for over a year on the publication of ‘King Island Flora: a field guide’. A revolving fund was set up to protect valuable ecosystems on the island through buying properties, covenanting and re-selling, this is ongoing run by Tasmanian Land Conservancy.