Fauna of King Island –A Guide to Identification and Conservation Management, Edited by Richard Donaghey 2003.

Excerpts from The Fauna of King Island – A guide to identification and conservation Management, Edited by Richard Donaghey 2003 and King Island Biodiversity Management Plan, 2012

Introduction – King Island has a wide range of freshwater aquatic environments including rivers and streams and ephemeral and permanent wetlands (ponds, swamps, lagoons). The fauna of these environments is not well known, and the writing of this chapter required some new sampling to be done. As a result we now know that the island has many species (more than 140) of aquatic macroinvertebrates, including burrowing crayfish, aquatic insects, freshwater crabs and snails, as well as eight species of freshwater fish … 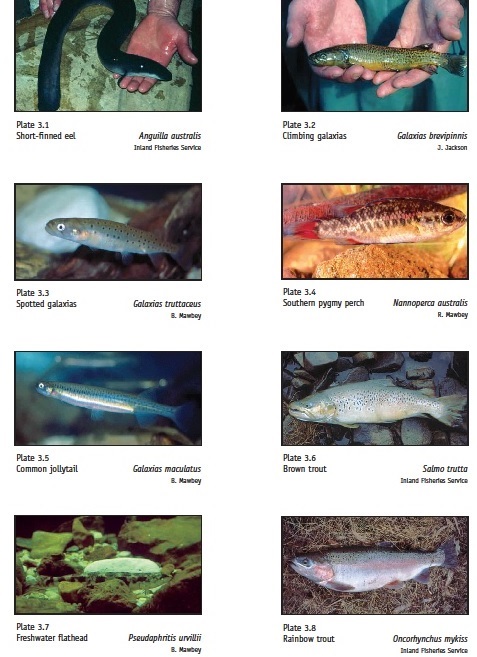 Two species of freshwater crayfish are known from King Island – Geocharax gracilis and Engaeus cunicularius. Both of these species are widespread on the island. They live in burrows, though G. gracilis can also be seen in open water in streams and wetlands. Engaeus burrows are found around the margins of swamps and wetlands and along river banks. Geocharax is also found in these habitats, but is also more widely distributed across field and heathy plains, often with very deep burrows. Both of these species are widespread and occur in both northern Tasmania and Victoria. Engaeus cunicularius is also found in northeastern Tasmania and Flinders Island. Both species build ‘chimneys’ at the entrance to their burrows, and those of Geocharax can be quite a sight when scattered over paddocks (or even golf courses!).

Several thousand species of invertebrates live on King Island, representing the largest proportion of the animal fauna. A few may be endemic to the island, but island populations of even widespread species are likely to be genetically different from those on the mainland and hence are an important component of Australia’s biodiversity. Insects and their relatives perform essential ecological services such as nutrient recycling, soil conditioning, pollination and seed dispersal of flowering plants and help regulate the numbers of other invertebrates. To a large extent, the insect fauna resembles that of the lowlands of north-western Tasmania. Indeed, King Island was attached to Tasmania as a peninsula as recently as 12,000 years ago when sea levels were much lower. Unlike for vertebrates, there have been limited studies of the island’s invertebrate fauna. Until further collections are made, only a broad impression of this fauna can be gained from the few publications which mention the island’s invertebrates, together with insights from the fauna of similar habitats in northern Tasmania.

From KIBMP: Little is known about the invertebrate diversity on King Island. The lack of baseline data on invertebrates makes it difficult to discuss population trends or to propose management strategies. However, it is likely that habitat loss and fragmentation has had an impact on their abundance and diversity. The Southern Hairy Red Snail (Austrochloritis victoriae) is the only invertebrate currently listed under the TSP Act that is known to occur on King Island (Table 1). This snail is known only from the northeastern coast on King Island and southern Victoria, south of the Great Dividing Range (Smith & Kershaw 1981). Until 1996 the Southern Red Hairy Snail was considered extinct in Tasmania. It lives in damp areas with well-developed paperbark, tea tree and Banksia scrub (Bonham 2009). 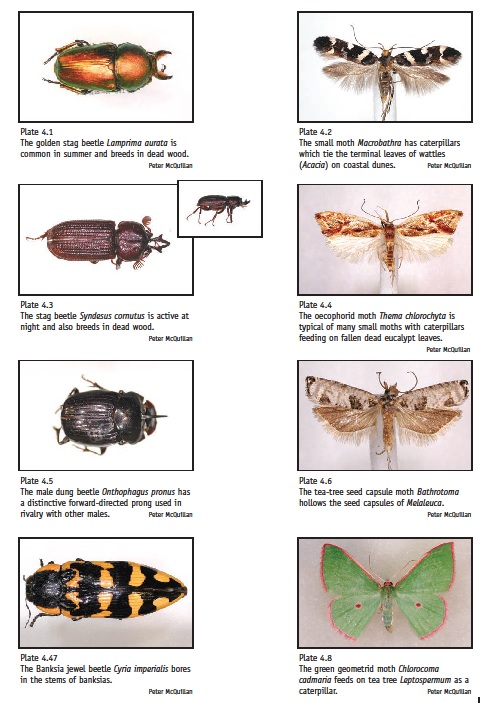 The Bass Strait land bridge disappeared about 11,000 years ago, leaving Tasmania and King Island geographically separated from continental Australia. Continental islands like King and Flinders have fewer species than nearby Tasmania and Victoria. ……

The frogs of King Island closely reflects that found in far north-west Tasmania.

Frogs are the only order of amphibians living in Australia. Four families occur naturally, whereas one introduced toad represents the only member of the true toad family. There are about 150 species of frogs in Australia. Eleven species inhabit mainland Tasmania, including three endemics. Six species occur on King Island. The six frogs found on King Island are two tree frogs, the green and golden frog (Litoria raniformis) and brown tree frog (Litoria ewingi); two marsh frogs, eastern banjo frog (Limnodynastes dumerili) and striped marsh frog (Lymnodynastes peroni) and two froglets, the common or brown froglet (Crinia signifera) and smooth froglet (Geocrinia laevis). ….
….The life histories of the six species of King Island frogs separate into three distinct groups. One group, the tree frogs and the common froglet, have non-foamy egg masses placed in water and aquatic larvae. The smooth froglet has non-foamy egg masses placed on land and aquatic larvae. Its relatively large eggs laid on land are later flooded with water, and the larvae then develop. The third group, the two species of marsh frogs, have foamy egg masses placed in water and aquatic larvae ….
….The breeding seasons of the six King Island frogs fall into three groups. The common froglet and brown tree frog breed all year, the smooth froglet breeds in summer–autumn, and the green and golden frog and striped marsh frog breed in spring–summer. Only male frogs call, and their calls are most obvious during their mating seasons when they generally call near or in water. Often there is a chorus of several species by late spring, but each species can be identified by its own distinctive call. 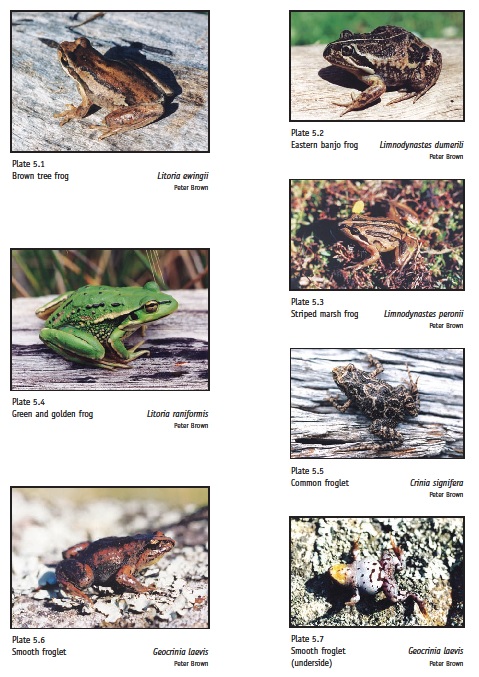 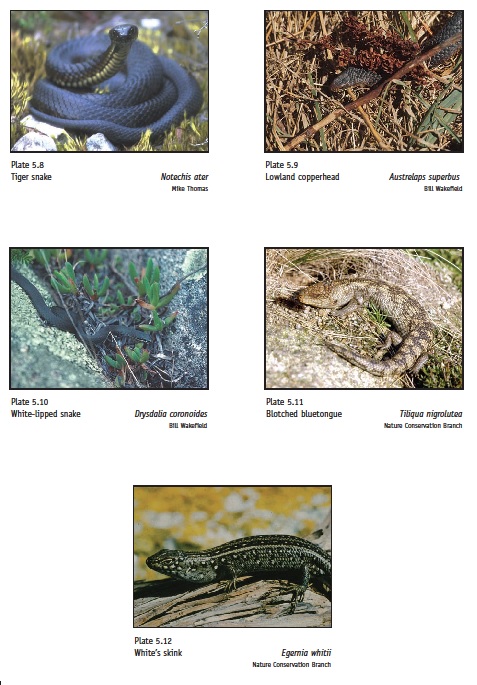 The terrestrial vertebrate fauna on King Island is dominated by birds, with 164 species recorded. Fifty are non-passerines, 36 are passerines, 12 are breeding or resident marine and shorebirds, 39 are irregular migrants and visitors, 14 are migratory shorebirds and gulls and terns, and 24 are resident and visiting marine birds.

The endemic King Island Emu (Dromaius ater) is presumed to be extinct (listed under TSP Act) and the Glossy Black-cockatoo (Calyptorhynchus lathami), Gang-gang (Callocephalon fimbriatum) and the Forty-spotted Pardalote (Pardalotus quadragintus) are considered to belocally extinct on King Island (Donaghey 2003). Seven species are currently listed as threatened under State and/or Commonwealth legislation.

King Island is an important stopover point for a number of migratory species during their passage over Bass Strait. Migratory species which regularly use the Island include the Orange-bellied Parrot, Swift Parrot, Ruddy Turnstone and Red-necked Stint.

The Spotted-tailed Quoll (Dasyurus maculatus maculatus) was seen until the 1950s and is now considered to be locally extinct and local populations of the Wombat (Vombatus ursinus ursinus), and Southern Elephant Seal (Mirounga leonina) became extinct shortly after European settlement.

Fossil records from the last interglacial period of the Pleistocene include modern wombats, kangaroos and wallabies. The larger kangaroos did not survive on any of the Bass Strait islands in the post-glacial period since there were insufficient grasslands to support a breeding population which eat large quantities of grass. The 12 terrestrial native mammal species that still occur on King Island are two monotremes (platypus and echidna), one dasyurid (swamp antechinus), three possums, three macropods (rednecked or Bennetts wallaby, Tasmanian pademelon and long-nosed potoroo), at least two resident bats and one native rat.

Native mammals that appear to be rare with very restricted distributions on King Island are swamp antechinus (Antechinus minimus), eastern pygmy possum, long-nosed potoroo (Potorous tridactylus) and the bats, the lesser long-eared bat (Nyctophilus geoffroyi) and Gould’s wattled bat (Nyctophilus gouldi). All these mammals appear to be more sensitive to habitat loss and fragmentation and hence are vulnerable to local extinction. These mammals have special habitat needs. The eastern pygmy possum and the two bat species require hollows and cracks in trees as roosts and den sites as well as nearby native forests and scrub for foraging. Swamp antechinus and long-nosed potoroo may require large forest remnants for their survival.

Three bat species have been recorded from King Island. One species, the grey-headed flyingfox (Pteropus poliocephalus), is a visitor from mainland Australia. The other two bat species, lesser long-eared bat and Gould’s wattled bat, appear to be rare, but this may be an artefact of inadequate surveys. 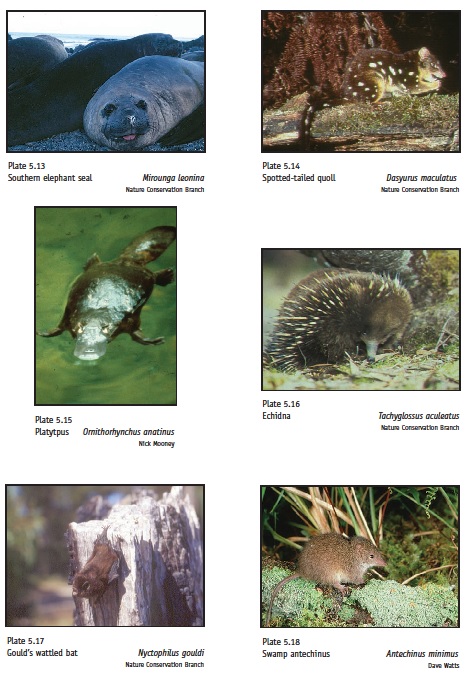 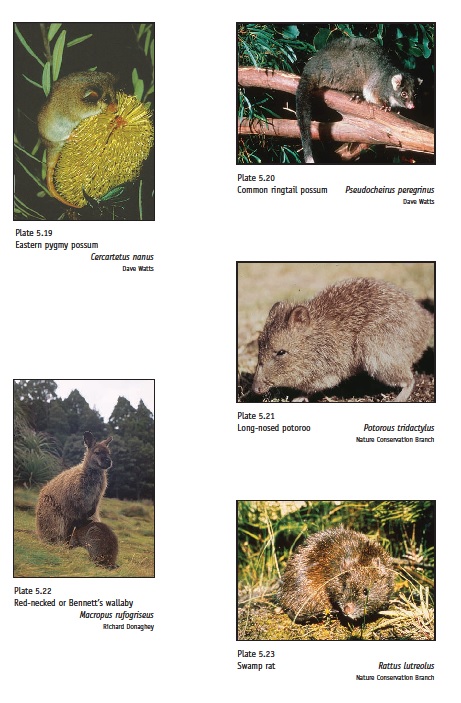 Extinctions of birds on King Island

The King Island emu (Dromaius ater) seems to have been the first extinction on the island as a direct result of human hunting. Commercial sealers, who arrived in 1802, used trained dogs to hunt the bird for food. Its small size (1,365 mm tall) and weight (up to 22.7 kg) compared to the mainland form (D. novaehollandiae) led Baldwin Spencer to describe it as a distinct species in 1906. Grey goshawk (Accipiter novaehollandiae) was recorded by the Field Naturalists’ Club of Victoria after their visit in 1887. Two birds, which were killing young turkeys, were shot in 1912. There have been no further reportings of this bird on the island. Glossy black-cockatoo (Calyptorhynchus lathami) once occurred on the island but disappeared in about 1920 after extensive fires. Gang-gang cockatoo (Callocephalon fimbriatum) was once plentiful when large areas of eucalypt forest existed. Forty-spotted pardalote (Pardalotus quadragintus) was collected by the Field Naturalists’ Club of Victoria during their 1887 visit, but there are no other records.

Extinctions of mammals on King Island

Southern elephant seal (Mirounga leonina) – hundreds of docile elephant seals on the north-east beaches were slaughtered by sealers, and the species was exterminated from King Island by early in the 19th century. Wombat (Vombatus ursinus) – in 1802 the log books of the Lady Nelson recorded the existence of wombat on the island, but the Field Naturalists’ Club of Victoria failed to find any during their 1887 visit, suggesting that the animal died out some time before the beginning of the twentieth century. Tiger cat (Dasyurops maculatus) – common at the time of early settlement, the tiger cat was wiped out as a direct result of persecution. Early settlers destroyed it at every opportunity as it killed their poultry and damaged the skins of game animals by following snare lines and feeding on the animals caught there. No animals have been seen on the island since 1923.

For further information download the full document Fauna of King Island – A Guide to Identification and Conservation Management, Edited by Richard Donaghey 2003.