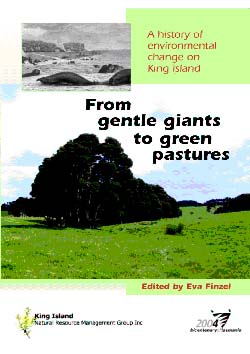 From Gentle Giants to Green Pastures

King Island has a unique history of environmental change that ranges from the extinction of the gigantic but gentle sea elephants to the burning and clearing of ancient forests for agricultural development and to the protection and restoration of native vegetation.
This book tells the story of the island’s geological development, its Aboriginal heritage and its changing environment since European discovery in 1801. It brings together the accounts from King Island settlers and old records and is illustrated by many previously unpublished photos.

From gentle giants to green pastures describes the changing attitudes to natural resource management over the last two hundred years. Fires and human influences have contributed to the demise and decline of animals and plants on King Island until the mid 1900s and changed the appearance of the island forever from large areas with native and often very dense vegetation to viable farmland. Since the 1960s concern has grown for the protection of the remaining native vegetation and work has started to repair some of the damage caused in earlier years.

About the Authors
Eva Finzel is a freelance writer/editor interested in environmental issues who lives on King Island. She is the secretary of the King Island Natural Resource Management Group Inc. and has worked on other publications of this group as co-writer and sub-editor. She has published historical research related to other topics.
Mike Pemberton is a senior earth scientist in the Nature Conservation Branch, Department of Primary Industry, Water and Environment, Hobart.
The work on the book has been guided by a group of volunteers and is supported by the State Government through the Tasmanian Bicentenary Grant Program.