King Island is an island in the Bass Strait, belonging to the Australian state of Tasmania. It lies off the north-west coast of Tasmania, surrounded by a rugged coastline with fresh seafood, famously good produce and some of the cleanest air in the world. 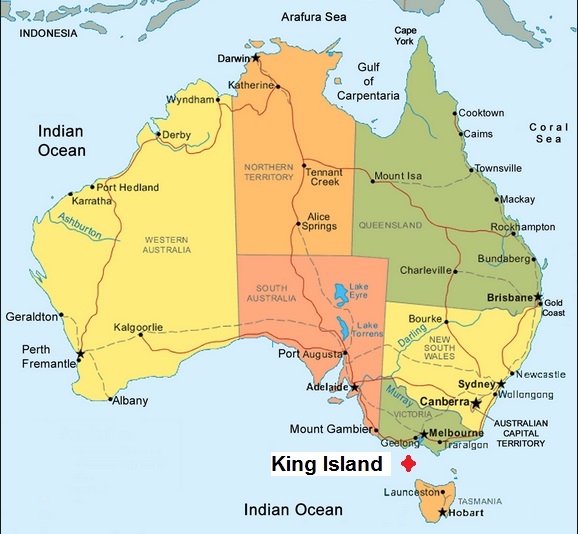 Lying at the western end of the strait, between longitude 144o East and 40o South, King Island is directly in the path of the ‘Roaring Forties’, a strong prevailing westerly wind. King Island sits about 140 km from both Cape Otway on the Victorian coast and Cape Grim on the north-west tip of Tasmania. King Island is part of the King Bioregion IBRA V7 (Commonwealth of Australia, 2012) which also includes the far north west of the Tasmanian mainland’.
The island forms part of the official land divide between the Great Australian Bight and Bass Strait. Thus King Island has similarities to both the northwest corner of Tasmania and mainland Australia and forms a transition zone between continental and island flora and fauna assemblage (Barnes, et al., 2002, p. 2).

King Island was originally part of a land bridge linking Tasmania with the Australian mainland, which was submerged around 12,000 years ago due to rising sea levels. A human skeleton was discovered in a cave on the island in 1989, which was dated to approximately 14,000 years ago (Sim Thorne, 1990). However, previous examinations had revealed no “shell heaps, bones, charcoal or other remains which might indicate Aboriginal occupation”, suggesting that the area was passed through by the ancestors of Aboriginal Tasmanians but not permanently inhabited. It was uninhabited at the time of European discovery.

Captain Reed is the first known European to discover King Island in 1799 while hunting seals in the schooner Martha.